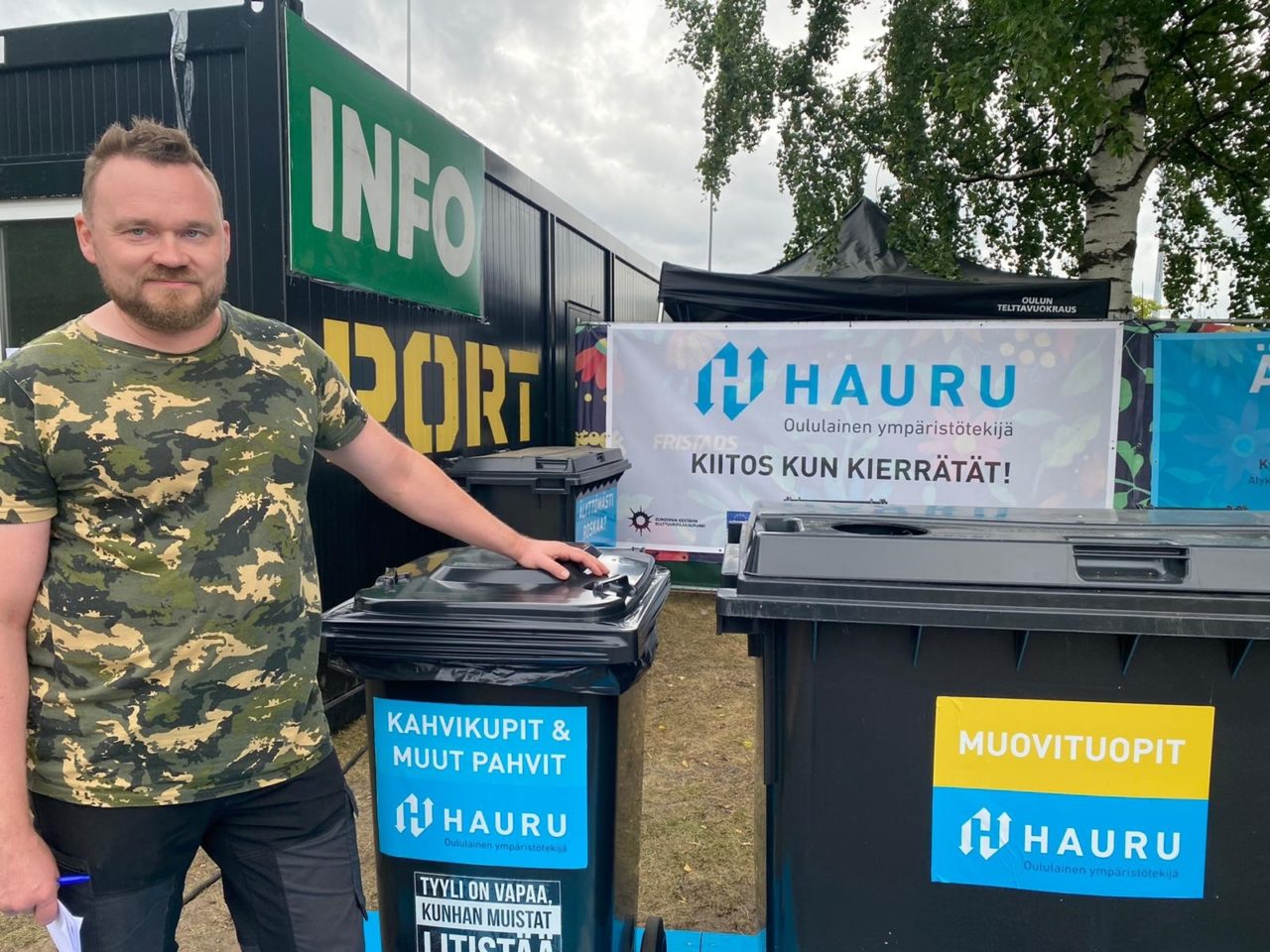 There were altogether almost 200 garbage and recycling bins in the festival area. In the photo, Mikko Hauru, the CEO of Hauru. Photo: Taina Ronkainen

Qstock is the biggest music festival held in Northern Finland. During the festival weekend in 2021, over 16 000 kg of waste was collected into garbage bins. By analysing the composition of the content in the bins, a lot can be learned in order to raise the recycling rate of festivals.

The organisers of the Qstock festival have struggled with the recycling of plastic pints and shot glasses. These single-use cups tend to end up on the ground and get broken under the feet of the festival crowd.

The Most Sustainable European Capital of Culture project offers a test platform for eco-innovations at festivals. With the help of the project, Qstock and Hauru waste management company partnered to pilot an innovation called Hauru Smart Festival Waste Management Concept.

Hauru brought separate recycling bins for plastic pints and shot glasses, cable ties, burnable waste, cardboard waste and biowaste to the festival area. Each bin had a sensor for monitoring the amount of waste in the bin. The concept also included a composition analysis of the bins’ contents and a carbon footprint calculation of the waste management, carried out in collaboration with Macon consulting company.

“Such an extensive analysis of waste composition had not been carried out under festival conditions in Finland before,” reckons Mikko Ahokas, the CEO of Macon.

Recycling rate could be better

During the festival, over 16 000 kg of waste was collected into the bins. However, only 14 percent of that ended up for recycling.

The bins collected over 14 000 kg of burnable waste, about 2000 kg of cardboard waste, 280 kg of biowaste and 150 kg of plastic packages. Only 13 percent of the collected burnable waste was actually burnable waste: the rest could have been recycled, if it had been sorted correctly.

Only 40 percent of the items collected in recycling bins for plastic pints were made of plastic. There were, for example, glass bottles and tin cans with recycling deposits, and biowaste that soils the plastic waste and makes it unfit for recycling. In addition, the plastic waste contained a mixture of different plastic types, of which biodegradable plastic is problematic, since it cannot be recycled among other plastic types.

“Catering services should be instructed to order dishes made of the same plastic type. When it comes to encouraging the recycling of deposit bottles, a campaign offering to donate the deposit money to charity, for example, could be helpful,” suggests Mikko Ahokas.

The pilot was a learning experience

In addition to the composition analysis, data from the sensors inside the bins suggests what kind of recycling bins are needed and where they should be placed to guarantee enough recycling opportunities in the most crowded places of the festival area.

Qstock festival, Hauru and Macon are happy with the outcome of the piloting and are going to continue their fruitful cooperation for a more eco-friendly festival next year.

The Most Sustainable European Capital of Culture project is financed by the European Regional Development Fund and the Council of Oulu Region in 2019–2022.