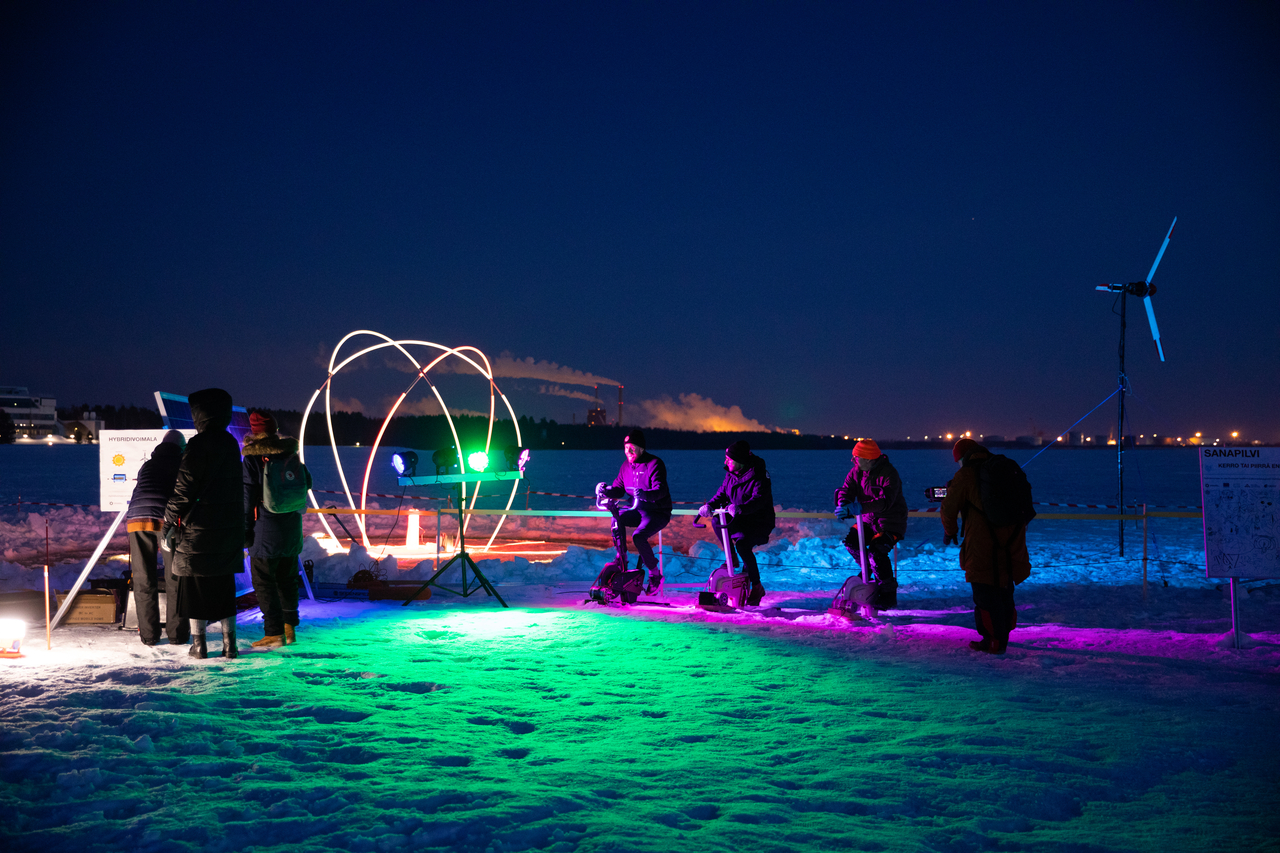 Frozen People festival was organised for the first time on 12th March 2022 on the sea ice in Nallikari, Oulu, Finland. A hybrid off-grid power station was piloted at the festival to generate electricity for illuminating art installations within the festival area. The organisers wanted to use environmentally friendly off-grid power at their event.

On the festival day, the sun was shining from a clear blue sky, so most of the power was generated by the solar panels: 2.4 kWh. The wind was exceptionally mild, and the windmill generated only 1 Wh of electricity. The audience managed to pedal 170 Wh of electricity.

Illuminating the art installations consumed 1.7 kWh. Janne Käpylehto estimates that if the installations had been illuminated by electricity generated by a combustion engine generator, it would have required 10 litres of petrol and caused 27 kilos of carbon dioxide emissions. The hybrid off-grid station did not cause any emissions while in use.

“The pilot had a small effect on the carbon footprint of the event, but the magic of the off-grid station lies in participation and demonstration. The audience saw where the electricity comes from and could take part in generating it,” says Käpylehto.

The festival gathered 1500 attendees altogether. According to a survey, 80% of them explored the power station.

The first step towards a sustainable cultural capital year

At the Frozen People festival, grid power was utilised for the PA system during DJ shows. The festival’s aim is that, in the future, all the power needed at the event could be generated self-sufficiently and ecologically.

The PA system consumed 30–40 kWh during the festival. To generate this much power self-sufficiently, the off-grid power station should be ten times bigger than the one at this year’s event.

Thanks to the successful pilot, Frozen People and Janne Käpylehto are likely to collaborate in the coming years and carry out new power generation experiments.

The hybrid off-grid power station was part of the green innovation pilots of the Most Sustainable European Capital of Culture project. Green innovations for summer events can be submitted until 15th May 2022.

The project’s aim is that by the year 2026, when Oulu is the European Capital of Culture, events in Northern Ostrobothnia would be as carbon neutral as possible. The Frozen People festival, organised by Oulu Urban Culture, will be part of the programme of the cultural capital year.